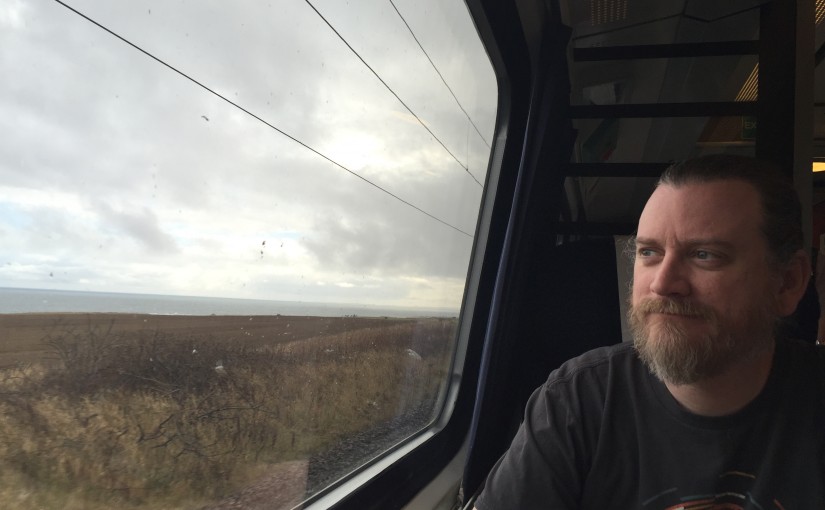 Got to sleep in a little this morning and the jet lag improved slightly so we were fairly refreshed when we headed out for the York rail station. In less than 24 hours we had learned quite a lot about York public transport so we were able to catch a quick bus and made it to the station with 20+ minutes to spare. Which was great since it turned out I printed the wrong tickets and had to bust it back to the ticket kiosk for a redo.

Once on the train we settled in with books and games but were soon distracted by the view. First, it was an interesting view of the countryside since there were sunny breaks in the clouds that were beautiful. Also, a good chink of today’s journey ran parallel to the eastern coast of the UK and we were able to look out at the cliffs and white caps on the water with Norway and Denmark in the far-off distance. Very pretty. [Train view video: IMG_0197]

As with each spot we had done our research beforehand and Cam was sure it was a quick walk to the hotel in this case (good news since it was another cold day with some rain/sleet). This seemed true but Edinburgh is sneaky. If you haven’t been, the city center is a very vertical city and it turns out the road we wanted for our hotel was right next to the station, but 40 feet UP. Cameron managed to find a super-neat little alley that saved us some walking time, but it did require hefting our luggage up a lot of steps and some very steep sections. It was totally worth it when we emerged onto High Street, part of the Royal Mile complete with cobblestones and at least 3 beautiful churches in view.

Our hotel was just around the corner and after a quick luggage drop we immediately headed out. Since we got into Edinburgh after 12:30pm this is the shortest amount of time we have in any city on this trip so we planned to spend as much as we could out on the town and immediately headed to the first stop on the Royal Mile: Edinburgh Castle. We did get distracted by some very interesting street vendors and entertainers, and spotted several places we wanted to visit on the way back, but we continued the climb and finally made it into the courtyard in front of the castle entrance.

I don’t have photos of exactly what we saw but this was the first view we had of Scottish hills and it completely made me tear up. On top of that there are several nearby cliff faces (I can’t figure out why they didn’t build the castle in some of these other spots except that maybe they couldn’t get up them!) plus a gorgeous slope down to the sea with a stellar view on all sides. The pictures from my “good” camera will have to wait until we’re home so all you have here are iPhone pics though it really doesn’t matter — it cannot do it justice.

We paid the  $$$ (or in this case, £££) to get into the castle. That said it was really worth it – a lovely tiny chapel, 800+ years old (one of the only parts of the castle that hasn’t been rebuilt since Robert the Bruce did not burn it when he sacked the place), a lovely Scottish War Memorial, ancient cannons (Mons Meg), the crown jewels (including a giant rock that was Cam’s favorite (he’s so Scottish)), and much more.

After that we headed down to the Scottish Whiskey “Experience.” We passed on the “experience” since we’re headed to at least on distillery in Inverness and instead visited the gift shop. After that we did some other souvenir shopping and checked out a few of the other beautiful sites as we headed down the mile. But by now we were exhausted and fancied (what? I can say that, I’m in the UK) a snack. By the most amazing good fortune we found a little tea room genuinely stuck in a corner off the main street and had our “real” tea: clotted cream, scones, raspberry jam, plus some chocolate shortbread to wrap it all up.

Refreshed, we wandered around the Mile some more and then headed away towards some of the other attractions. We went over some bridges and saw some beautiful buildings but we weren’t really sure what we were seeing. Eventually we stalked a tour bus to Waverley Bridge and decided to take that to get a glimpse of the rest of town. The bus took us all the way down to the harbor (which we’d never have gotten to otherwise) and we drove past The Britannia (apparently a very popular attraction in the UK), before heading back up to the Royal Mile, passing the Holyrodhouse Castle at the western end. Again, no photos here but the whole area was just lovely and the tour guide helped fill in the blanks.

We got the bus to let us off a few blocks from a restaurant our hotel concierge had recommended, The Cellar Door. Though pricey it was delicious and we got a free appetizer: our first haggis! Now this was deep fried and served with potatoes pancakes, so I’m not sure it’s quite the “traditional” haggis Cameron’s Scottish forefathers enjoyed – hopefully we’ll get to try a more rugged version later. But from my first experience I have to say it was great.

I would be remiss if I didn’t add here — I love Edinburgh. I’d heard good things and to give credit to our travel agent she had suggested we spend more time here but I was anxious to get to the Highlands (heading there tomorrow). But this is a beautiful city with the coolest nooks and crannies, great food, and there must be a million things to do. So this is definitely at the top of the list for when we come back.