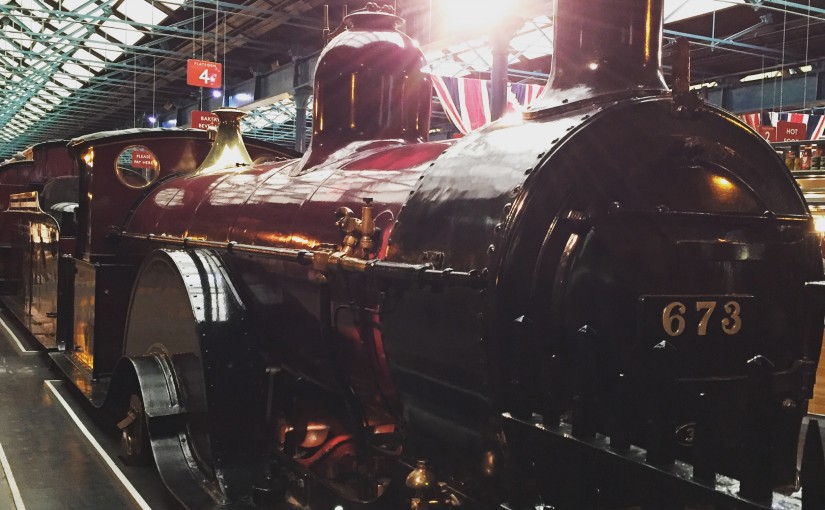 Well, sad to report that jet lag reared its ugly head last night. Both of us woke up around 1am and took nearly 2 hours to fall back asleep. Since we’d stayed up late hoping to avoid just this situation we really wound up short-changed on rest and dragged our sleepy butts out of bed on Friday AM.

Adrenaline kicked in a bit on the way to the train. We planned to take the tube and that worked out great other than the rush hour traffic – we had to wait for several of the subway trains which were full before we could squeeze onto one. And then we were in a bit of a panic to find our train and print tickets. We made it with about 5 minutes to spare so I didn’t get to enjoy King’s Cross as much as I wanted but it was beautiful and I passed Platform 9 which was enough for me to imagine finding the final 3/4.

The train was a delight. Cameron, lover of all things train, was excited about it beforehand, but I fell in love as soon as we found our seats and settled in. The view was great and we were in first class so we got free breakfast, tea, and coffee. This is totally the way to travel.

Lots of video from the ride north. Midway the sun went in and it actually snowed for a good chunk of the trip and then changed to rain as we got closer to York. That should tell you what our day was like though: rainy and nearly cold enough for snow but instead just plain miserable.

We learned from our arrival in London and rather than trying to use public transport with large amounts of baggage, this time we got a taxi. This turned out to be a wise investment because our driver explained that York was in a fair bit of chaos. Usually there are three bridges in the city center area, but one was closed from 9:30am-4:30pm everyday for repaving. This was clearly an issue for the traffic congestion – everything we did all day was marred by difficulties getting around. But it was really helpful to know what was going on.

After checking into our hotel we set out for the National Railway Museum. Knowing traffic was bad we opted to walk, which was a 20-25 minute walk and none too fun in the rain. We got lunch at the Rail museum and then spent several hours wandering around and getting acquainted with Britain’s long history of rail travel. I can tell you they are very proud of the Flying Scotsman, a train from the early 1920’s that was heavily marketed and subsequently brought out of retirement in the 2000’s. Anyway, it’s a big deal.

Saw lots of other trains (see photos below) and headed back to the hotel around 3pm. We were both super-tired but managed just to rest and not sleep before heading out for dinner around 5pm. I had done some research and heard good things about a bar called “The Phoenix” so we stopped by there. The didn’t have food but it was a beautiful detour. Small and quiet with a nice fire going (perfect on that crummy English evening) and it had 5 beers on hand-pump, 3 of which the nice proprietor let me try! Cam got a Glenfiddich and I got a nice ESB from a Yorkshire brewery. Lovely. Before leaving we got a dinner recommendation from the owner for a pub down the street called the “Rose and Crown” (classic English pub name). Took a hike through the rain and wind for a very yummy (and filling dinner) and then finally headed back to the hotel around 7pm.

And two more wide-angle from the Rail Museum…