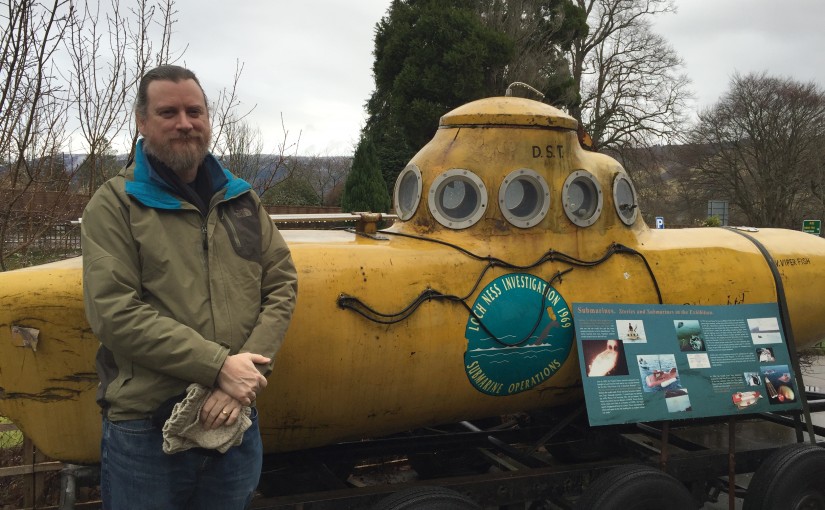 We woke up an hour early this morning thanks to an alarm malfunction and since we couldn’t get back to sleep we had a bit more time for showers and packing up. We had a great breakfast – best one so far – at our Edinburgh hotel, and it included haggis! This time it was not deep- fried, or in sausage form but just crumbled, and it was delicious. Breakfast also included cheese and meats like a real English breakfast, so other than the fact that we had to rush off to the train, it was awesome.

We made it to the train station in good time and were on our way down to the platforms when an alert came on telling us to evacuate the train station for an emergency. You can imagine we were somewhat alarmed about this but we didn’t have too much time to freak out before they let us know it was a drill and reopened the station. So back in we went, found our train, and settled in for the haul.

The trip from Edinburgh to Inverness was a long one. It was about 3 hours of travel with lots of stops. And if we were unsure of what country we were, these stops woulda clued us in: Inverkeithing, Kirkcaldy, Blair Atholl, Dalwhinnie (no surprise, the site of Dalwhinnie distillery).

This trip was also a beautiful one. We started with more of the lovely coast views and then moved into gradually bigger and bigger hills. At their largest point we were in the midst of massive snowy hills – nearly mountains. Because they were so snowy and had no trees they were almost invisible against the grey sky, but still so lovely. In other sections the trees were thick and all very old deciduous trees – something that looked like a combination between Switzerland and Canada. It also snowed a good portion of the trip but there was no snow by the time we actually pulled into Inverness. The city itself is on an inlet and alongside Loch Ness so it’s a bit more temperate. Though not much; it was COLD.

Once we arrived it took us some time to get our “hired” car and hit the road and I have to say, at this point the tension ramped up. Driving on the left is slightly terrifying (at least for the passenger but maybe that’s because I felt like I had less control?) and complicating matters our car is 1. and SUV, and 2. a manual. Now, this isn’t an “American” SUV, it’s comparatively tiny, but it’s still bigger than most of the other cards on the road and these roads are narrow. And the manual is of course to the left of the driver, so as Cam described it, the muscle memory we have from driving stick does us no good on that side. And on top of all that we’re trying to drive in a city we don’t know, on the “wrong” side of the street. And roundabouts. Oh sheesh, SO many roundabouts.

We managed to get to our hotel without incident and checked in. Culloden House is a large manor house on the outskirts of Inverness. We got upgraded to a suite, which is fantastic. It is an old house though, so the bathroom slopes downhill to the door and it’s quite chilly (hoping it warms up tonight) though I’m writing this next to a fireplace in our sitting room, so who can argue with that?

After check in we turned right back around and headed out. By this time it was after 2:30pm, but as our other days in Inverness are basically accounted for already we wanted to try to see some of the town. We found a Loch Ness exhibition about 15 miles outside of time and managed to use our local phone to navigate there. The “exhibition” was interesting, though far from high-tech. Add to that the fact that we were one of the only people there and they closed up after us – at about 4:30pm – well, it wasn’t a hub of activity. But we learned a lot, like the fact that while it’s not that large, Loch Ness is so deep (755 ft) that it contains more fresh water than all the lakes in England and Wales combined. Also <spoiler alert!> Nessie isn’t real.

On the way back we decided to stop for a very, very late lunch/early dinner and discovered a promising place online that was located near the Inverness castle called (appropriately) The Castle Tavern. We managed to find it without too much trouble, but we couldn’t find a parking spot anywhere. We eventually, after many somewhat arbitrary turns, found a spot somewhere that we thought was close to the restaurant but a fair bit of walking just got us lost. And then our local phone (and GPS) died. We were about to freak out but instead I asked a friendly-looking local and she gave us excellent directions (we were going completely the wrong way) and we got to the tavern around 5pm.

We had a delicious dinner – Cam had bangers and mash and I got the special of the day: roast beef with Yorkshire pudding! Yay! I had actually tried to find Yorkshire pudding when we were in York (because, duh) but had no luck so I was super-excited to find some. After we were done we headed back and, with one or two long, unintentional detours, we managed to remember enough of our initial drive out to get back to the hotel.

And now we’re settled in for an evening in our room. We ordered some tea, including scones and had that for a “dinner”, and just relaxed with a blog post while watching ‘Back to the Future III.’

Oh! And today is Mother’s Day in the UK so we made sure to say “hi” to our mum’s on Facebook.

P.S. Apparently old homes don’t have great internet access, or at least this place falls a little short. Having a very hard time uploading images and can’t get any videos posted so you may have to wait a few days for the bulk of the uploads since we’re here until Wednesday.