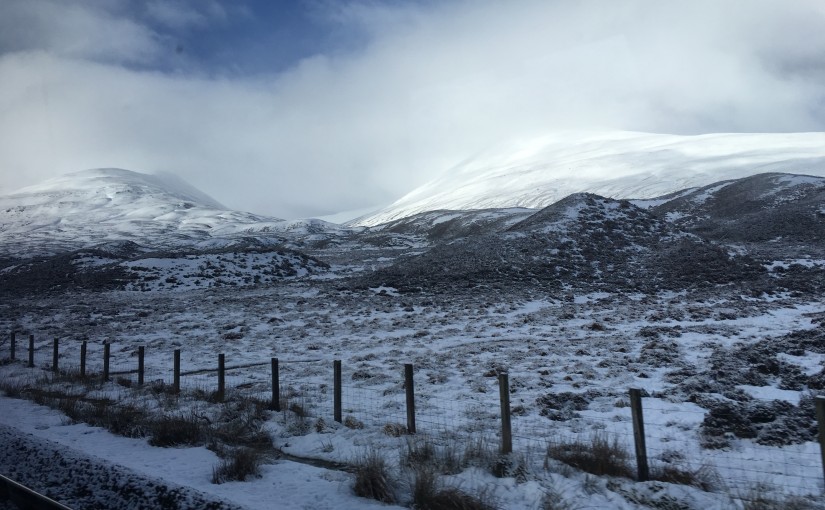 Got up early again this morning to make an 8:45am train. We did another breakfast at Culloden House and did a bit better ordering this time – I had scrambled eggs with black pudding and a croissant. I figured this was just about the perfect European breakfast and the best place to have it.

We hit the road with some time to spare so we could get gas in the rental car and return the keys. Then we booked it over to the station, printed our tickets and headed for our last train ride on this trip.

We have loved the train rides on this trip. Even this one, which wasn’t as pretty as most, was still lovely. It’s just such a fun and easy way to travel, and it really makes Amtrak seem pretty pale by comparison. For once I managed to stop taking constant photos and instead read my book for a bit and napped (because as anyone who has traveled by train can tell you, the train is great for napping) and we got into Glasgow around 1pm.

We’d done some research beforehand so we knew our “hired” car in Glasgow was some distance away – about a 30 minute walk. With our suitcases we were not too keen to go through that so we got a taxi to the Europecar rental location. We were really pleased when the attendant let us know that we could drop our suitcases in the car and then leave it there. Parking would have been at least £5+ and Cameron wasn’t keen on driving a new car through downtown Glasgow. So we dumped our stuff, grabbed my camera, and headed back into town.

As luck would have it the place we decided to do for lunch was just down the street from the train station we’d just come into, so we retraced our steps. By this time it was 2pm so we stopped at Waxy O’Conner’s for lunch, a spot that we’d found recommended online and in tourist brochures. It was really cool (multiple levels, amazing wood and cooper), and once again, great food. It definitely had a very Irish feel, though much of Glasgow felt that way – a mix of Scotland, Ireland, and England. We decided to share a sandwich (Cranberry, Brie, and bacon) and then two sides (Macaroni and cheese, cajun-seasoned chips) – which turned out to be tons of food! We made a good dent in them though, and I washed it all down with a Guinness (since it seems it was the closest to Ireland we were going to get on this trip).

Afterwards we wandered back down to George’s Square. This was a block away from our restaurant, and the starting point for a bus tour that we’d discovered. Since we didn’t have much time, and wanted to see as much of Glasgow as we could, we did a hop-on, hop-off bus tour. We did see several beautiful places that we wanted to hop-off, but ultimately we didn’t have time. On the plus side the bus tour also told us some of the history of the city. So, for example, we learned that George’s Square is named after King George III, and his statue was supposed to be at the top of the obelisk in the center of the square. But after the Revolutionary War and the loss of the colonies, George lost his “top” spot, so to speak and was replaced with Sir Walter Scott for no better reason than that people were enjoying his stories at the time. Don’t feel too badly for George – he still got the square named after him.

After our walk back to the car we headed out of town, and aimed for our hotel, Cameron House on the southwest shore of Loch Lomond. Though we wound up heading out with rush hour traffic we made good time and found our hotel pretty easily. And it’s wonderful. Like, my new favorite place. Our last hotel was like a stuffy English manor house – this is like a richly-adorned Scottish manor house. It’s not a castle – it’s warm and comfy – but there are coats of arms and dark-paneled walls. And heated floors in the bathroom. It’s perfect. 🙂

We thought we’d head to one of the four (yes FOUR) restaurants for dinner so we picked the one that wasn’t super-fancy and went down around 7:45pm (we actually thought we had a reservation but we got confused with some other “McFarlane” party – that’s the kind of thing that happens around here). Turns out the not “super-fancy” restaurant was still pretty damn fancy. And expensive. We were still pretty full from lunch so we split the Scottish steak filet and each had a side: the duck-fat chips and the creamed spinach. And ohhh, were they good. So to recap, I had croissants, black pudding, chips (fries) brie, bacon, and steak today, so I’m pretty sure my heart attack is imminent. But boy, everything was yummy!