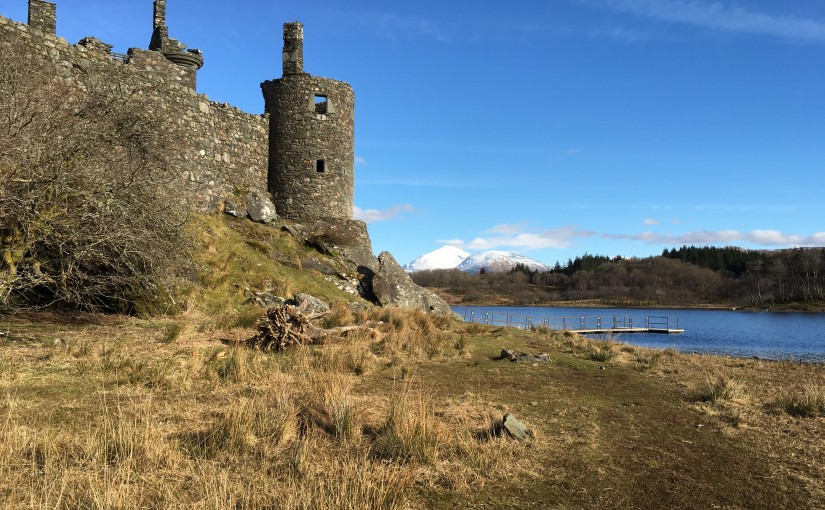 We got to sleep in a bit this morning and then hit the road around 10am. We don’t have any specific plans for these two days outside Glasgow, though we do have some things we wanted to get done:

We did a search for nice castles nearby and we found one near the northern end of Loch Awe, just to the west of Loch Lomond. Of course we made that discovery a couple days ago and neglected to look it up again before we left for the day, but more on that later.

Anyway we headed north along the lake and were in for more beautiful views. Since we (finally) had some really great weather the loch and the mountains beyond were really just stunning. We also had a great time navigating the really super-narrow lanes of the road that ran along the loch, especially since they had plenty of trucks and tour buses (although it must be straight-up NUTS over the summer).

We rolled into Tarbet to check out the McFarlane museum around 11:30am and, after a few u-turns to try to find the place, discovered that it was closed. The center was housed in an old church that had been converted to a restaurant. As we later discovered, the church-restaurant has had several owners and names, and the most recent seems to have failed a year or more ago, with the McFarlane Heritage Center on the second floor closing down at the same time. Cam later found a news story indicating that the McFarlane clan (what remains) had been trying to buy the church to keep the center open but apparently someone else had purchased it and there are now plans to turn it into flats! So for now we had to settle for taking a few photos of the McFarlane tartan in the windows, and checking out the cemetery nearby, which did indeed have a number of McFarlane headstones.

Eventually we headed out, again pointed north, and on the advice of our hotel concierge we kept an eye out for a bridge-thingie that offers great views. I can’t explain it better than that, I’m afraid. It’s a weird wooden tower at the far north end of the loch that you can walk through, but you can also climb up for a higher view. It was weird and super-cool. And it also had a nice cafe, which is where we stopped for some coffee, tea, and breakfast croissants.

After our quick break we proceeded to look for the castle we had found earlier in the week. I thought it started with a “k” so we did a Google search for it and came up with Kilchurn Castle, on the northern shore of Loch Awe. Our fancy rental car has a fancy GPS so we followed that to the castle but even though we could see it from the road, we couldn’t find a way to get to it. After once again making a couple u-turns we found a parking lot that had a path and discovered that the castle was only accessible on foot. But long before we made it to the castle we worked out that this was probably a just ruin based on the fact that there was no one else out there. We hadn’t really counted on that – we were hoping to tour a castle – but we went ahead anyway, making the long walk across a marsh and dislodging a bunch of sheep in the process (which was pretty cool). They were ruins, but in tact enough to be locked up so we couldn’t get into the castle. We did get some great pictures though, and walked around the area for a bit.

We made a couple other stops, both on the way to the castle and back. At one point in the heart of the mountains we pulled over to the side of the road. I really wanted to see what it was like to walk through Scotland’s huge brushy grasses and marshy areas (at this point we hadn’t yet come to the castle so I didn’t know how much of a chance I was going to get!) and I hiked down a big hill and through some grass to try to get some shots near a small river/large stream.

We also stopped for lunch later in the day at a nice restaurant just off the highway, and made another stop alongside the loch and walked down to the water. It was great to have a chance to really wander around the more remote parts of Scotland. And despite the difficulties we’ve had with the weather I definitely wouldn’t change a thing – coming in the early spring we’ve been able to avoid a lot of crowds.

Eventually we made it back to the hotel and spent the evening in our room with a room service dinner. Right now I’m writing a fairly nonsensical blog post because I’m distracted by “Hot Fuzz” on TV. You know they can curse on TV here?!