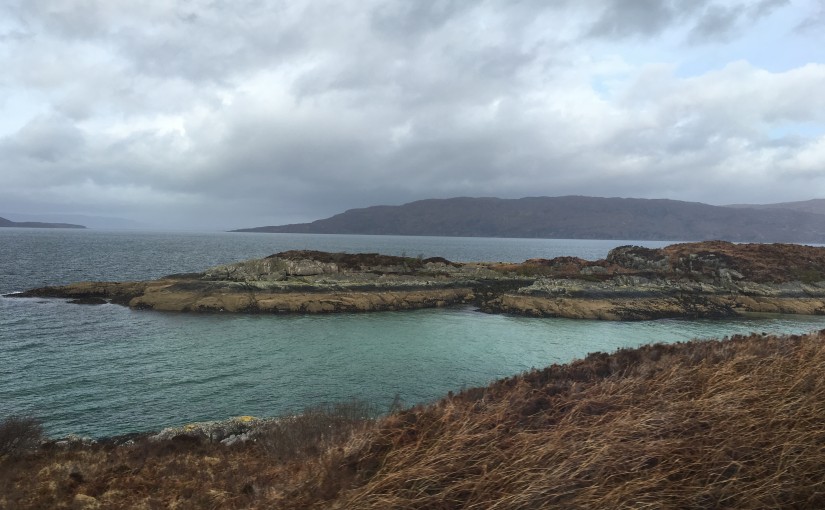 Today was our trip to the Isle of Skye – something we were both really looking forward to. Skye is an outer island off the northwestern shore of Scotland and very far, even from Inverness, so we had a long day ahead of us.

We did make it down in time for the hotel breakfast today. Culloden House has a very nice restaurant, in fact it’s one of the highest rated in the area, so we were looking forward to a good breakfast. I had the smoked salmon and eggs, and Cameron had the Culloden Pancakes and bacon. Plus their delicious coffee and tea. And we were off.

We wrangled a parking spot at the Inverness Mall (adjacent to the Rail Station) and then hopped aboard for a 3-hour train trip to Kyle of Lochalsh, the origination point of our Skye tour. Our tour agent had mentioned that this was a lovely train ride and boy, was she right. It’s not like the views sucked up to this point, but we really had such diverse and beautiful scenery on this trip: mountains, lakes, hills, cliffs, bogs, seas – amazing. I’m pretty sure the English word “craggly” was created for the Scottish hills. I could not stop taking videos and pictures – there are a batch available from our YouTube playlist but here are a few…

We arrived right on time at Kyle of Lochlash (pronounced lo-calsh) and our tour guide and van were waiting. The fact that it’s still the off-season has definitely saved us from annoying crowds – there were only 2 other people on the tour with us, girls from Germany. We headed off, across the bridge (built in 1995. Before that there was only a ferry) to Skye.

Our tour guide was Marshall and he was a Skye native. Obviously. He did give some island history but he spoke more, and much more passionately, about some area traditions: the Gaelic (pronounced like “garlic” but without the “r”) language and traditions, Gaelic upbringing, and crofting (smaller sub-sections of large properties divided among the area population for crops or animal grazing). I won’t say it wasn’t interesting, but I didn’t learn as much about the Isle of Skye as I had hoped to either.

Once again, the scenery was magnificent and I took lots of photos. Unfortunately, we did once again get stuck with rain (and sleet!). While it eased off a bit over lunch and even let a bit of sun in while we were in the capital of Portree, eventually the sky really did settle in with lots of mist and rain, so the photo ops declined as the day went on.

We headed back to Inverness, once again by train. Since we didn’t have a chance to eat before we left we were hoping for something simple on the train but this was our first trip with no food service offered (ironic since it was the first time we actually needed it!). We were a bit peckish by the time we rolled into Inverness at 8pm. We didn’t want to do anything too crazy so we went to Pizza Express, a chain in the UK (from what we can tell, we’ve seen a few throughout our travels). Still, it wasn’t “fast food” – we were able to sit and have a drink and eat. We got back to the car around 8:30pm, paid our exorbitant parking fees (£10!) and then made our way back to Culloden House.

Tomorrow is another early day. Check-out, then rental car return, the train to Glasgow, new rental car, and finally a 30+ minute drive to the hotel. Last stop before heading home!