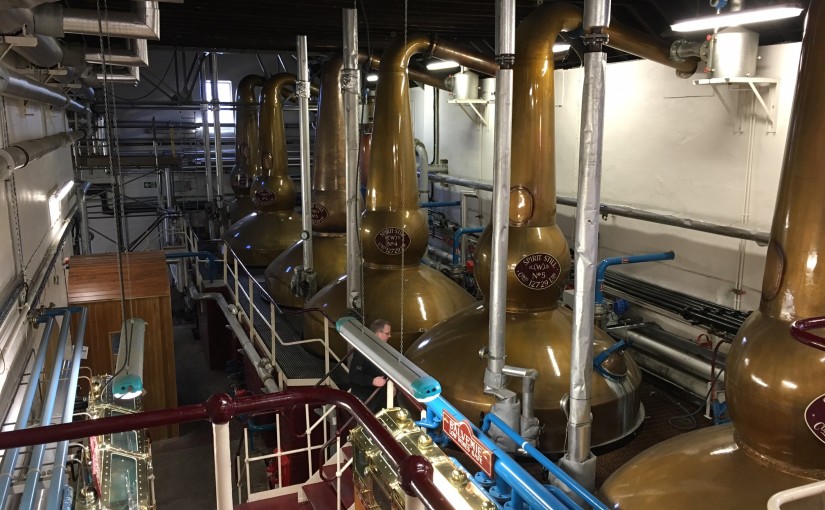 Cameron and I did set an alarm this morning but when it went off we had a mumbled conversation about how dumb alarms are and then went back to sleep. The house has large shutters that close over the windows, and curtains over that, and since it was so cold we were bundled up so it was nice and warm and dark. Plus it was a Monday an no one ever wants to get up on Monday’s.

Anyway, we missed the Cameron House breakfast but had a nice hot shower and then headed out around 11:30am. Our only plan today was the Balvenie Distillery tour so we were in no rush. We planned to try to find something to eat on the way to the distillery in Dufftown (Yes, like Duff Beer on the Simpson’s. We made fun of this a lot.) but it was difficult to find anything while trying to navigate and get through the complicated small towns. Our mobile phone with the UK SIM card has been very worth the £20 but has also been extremely sketchy since we moved north of Edinburgh so getting GPS and directions has gotten a bit tougher.

We wound up making it to Dufftown without breakfast but stumbled upon a nice spot in the center of town, The Stuart Arms. We were the only people in the place – almost the only people in the town – it was really quiet. We split an appetizer of black pudding, white pudding, and haggis in a gravy (that’s a bunch of meat, not a dessert btw), which was amazing. We then split macaroni and cheese for a main course and again – delicious. It was a great find.

After lunch we headed to the distillery, which was right outside of town. Dufftown is part of what’s known as “Speyside” and it has a huge population of distilleries. We passed several on the drive in, including Dewar’s. Glenfiddich, which is owned by the same parent company as Balvenie, is just down the street.

Got to the distillery about 15 minutes early which let us meet the tour guide, David Mair. He also had an apprentice guide named Charlie who came with us. It’s a very small tour – a max of 8 people only – but even so we only had 5. Other than Cam and I there was an Australian who works for Wild Turkey and two sisters from the States (one of who lives in Cincinnati!). So at 2pm the seven of us started our 3-hour tour of the distillery and grounds.

I have done a lot of beer tours, however this was my first distillery tour. And it was a great tour. David was a very knowledgeable guide and we were allowed to take any photos we wanted (except in the warehouse) so I got lots of shots. We were also able to try samples during various phases of the process and see how the whole place was built up and run. Since it was first started in 1892 it has obviously expanded a great deal but some parts of the property pre-date even the initial purchase of the area by the founders — there are some very old and cool buildings. They grow some of the barley they use in the hills around the distillery and then that’s also malted at the distillery. For all the effort that goes into that it’s only about 15-20% of the malted barley they need to make Balvenie, so of course much more is brought in. But still, seeing that whole process, especially the peat they use to impart the smokey flavors in the malted barley, was really neat.

I’ll save you the full recap, but we were able to try samples of several vintages of Balvenie and – most importantly – from various casks. The flavors and colors are very largely dependent on the barrels they’re aged in: what types of barrels, how old they are, etc. Since barrels are so important they also have 8 full-time coopers (people who make and repair barrels) and watching them work was one of the coolest parts of the day. And Cam was able to pull his own little bottle-full of a 13-year-old Balvenie from a sherry cask.

After we sobered up a bit and finally got the GPS working again we headed back to Culloden House. We didn’t want to go all the way into Inverness for dinner so we hunted down an ATM and grocery store for a few necessities, and then we went back to the hotel for a room service dinner next to the fire. It’s been so cold!

Since all the photos I took today were on my “real” camera I have nothing to share. I’ve got a couple here from Cam but you’re going to have to wait for the rest… sorry!