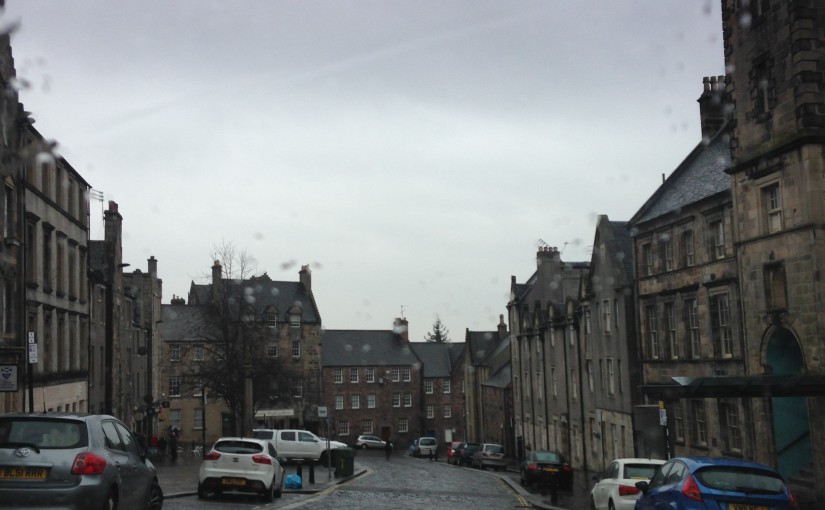 Well, here we are. Last day. One note to interject before we proceed. Yesterday Cam and I talked it over and decided to check out of the Cameron House a day early. It’s extremely expensive, nearly £100 more per night than any of our other hotels, and it’s 30-40 minutes from Glasgow. Which means that in order to get our rental car back and make our 7:30am flight we’d have to wake up at what is, by my math, too damn early. So we informed the Cameron

House (they were very nice and let us out of our third day without a penalty) and then proceeded to book with the Holiday Inn Glasgow Airport.

We did all that yesterday which meant that when we woke up this morning we had to pack up and get out. We had one more lovely shower and one more turn around the heated floors of the bathroom (I don’t know why I love them do much but I do) and off we went.

I know I said we had three things we wanted to do but after talking it over we decided we didn’t want to do the lake tour with the McFarlane’s that much. The tour didn’t start until 2pm, which would have meant killing a LOT of time after our 10am check-out, and we weren’t at all sure if or how we’re related so ultimately we went back to the drawing board. I wanted to try again with a castle we could actually tour and Cam wanted to check out the Riverside Museum with its transportation exhibits back in Glasgow. So we hopped in the rental car with our bags and off we went.

Sadly the awesome sunshine we had for the last couple days was gone and though it wasn’t as cold as it had been it was almost constant rain all day (it was good we bagged the boat trip!). We enjoyed our drive to Stirling, northeast of Glasgow and the site of Stirling Castle. This drive actually had our first hedgerows (we’d seen them on the train up, but not driven with them) as well as lots of sheep and some big trucks.

We drove into Stirling around 12:30pm and made our way to the castle (this rental car had GPS which was great. We have it on our UK phone but coverage was really spotty). We parked a ways off but avoid fees and walked up to the castle. Once again took loads of photos (to follow) and tried to do a bit more touring inside than out thanks to the rain. We saw the great hall, the King and Queen’s private apartments, and the staff told us some very interesting stories about the place and its various inhabitants. After visiting a couple castles they all have certain things in common: lots of tenants over the years (more than the average due to war and royal dramas) and they all have been rebuilt extensively. There doesn’t seem to be a castle around that wasn’t sacked at some point. Or, if it was successful it was added onto it. So they all have bizarre and diverse histories.

After Srirling Castle we hopped back into the car and headed into Glasgow. We had intentionally planned to do the drive after lunch time, hoping to avoid traffic, but the Glasgow motorway was a mess nonetheless. We fought through traffic and, after a couple detours, made it to the Riverside Museum.

At this point we’d only shared a scone and some cake for our breakfast a couple hours before. We debated walking to restaurant but the weather deterred us and we would up eating at the museum cafe which was surprisingly good. I had the Shepard’s Pie (thereby hitting the last of the English foods I could possibly have wanted – and accordingly I burned my mouth on it which you must always do with Shepard’s Pie) and Cam had the Beef and Sausage pie. We wandered through the museum for awhile and braved the pouring rain to get a few shots of the Glenlee (the “tall ship” moored behind the museum) and then we headed for our hotel near the airport.

Since we were pretty much done we were also able to check in our rental car. We didn’t save any money, since we’d still had it most of the day, but we were able to get it gassed up and taken car of, which we’d otherwise have needed to worry about the next morning. We also checked into the Holiday Inn, and after an uninspiring dinner in the hotel restaurant, and some fascinating BBC documentary, we went to bed around 10:30pm.