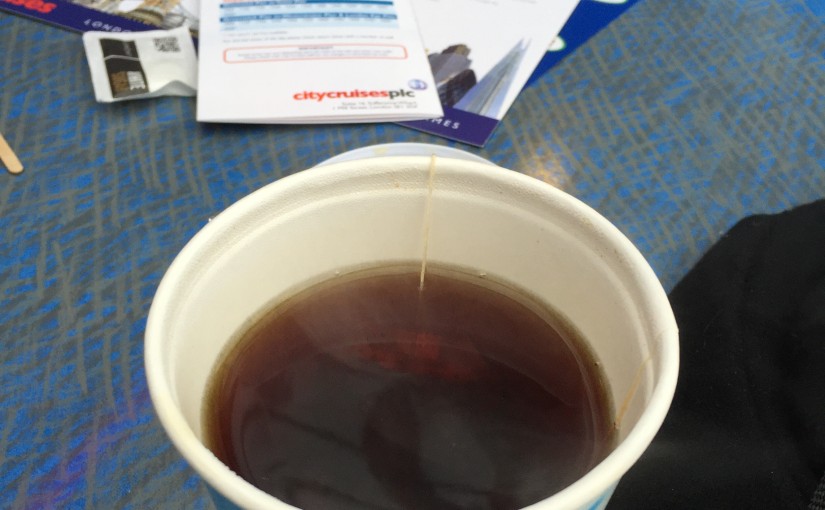 So Day 1 was really mostly hanging out at home and doing last-minute laundry and packing. Cam’s folks very kindly came and took us to the airport around 3:30pm and the joy began!

Ok, so it wasn’t all joy. We got on the flight and took off fine. Those of you who know Cameron know he doesn’t like flying so he took some drugs ahead of time which initially worked ok, mostly by making him sleepy. But by take-off time they were not helping much and poor Cam spent a good deal of the flight clutching the armrests. As it happened it was a very bumpy flight with quite a bit of turbulence. None of it was too severe, but it didn’t help Cam calm down, nor did it help us (or the multitudes of toddlers on the flight) get to sleep. In fact, aside from a brief 10-minute catnap that I somehow managed, neither one of us slept on the plane at all. Which really, really sucked.

On the plus side we landed early – we were both SUPER excited to not be on the plane anymore. Got through customs and picked up bags without incident and made it on to our first of many trains on this trip – Heathrow to Paddington. At that point we had the option of taking a cab to the hotel or going on the tube – we chose the tube.

If this were a ‘Choose Your Own Adventure’ story this is the point I would go back to and choose a different adventure. The tube sucked. More accurately, the tube’s 30+ minutes of delays, rush hour throng, plus the addition of 2 giant suitcases sucked. And the 15-minute walk in the rain and wind to find our hotel did not improve things. We arrived around 9am exhausted, cold, wet, and grumpy at the hotel.

And then I met a completely amazing woman named Tanja who let us check in early (9AM EARLY! That’s like an extra day!) and totally saved our marriage. We went upstairs and – despite our best-laid plans for defeating jetlag – decided to take a nap. Neither one of us woke up feeling great but I really can’t imagine how we could have gotten through the rest of the day without that break.

Around noon we headed out to see the sights. We’re very close to Westminster and wandered through Victoria Tower Gardens, adjacent to Parliament and then around the Parliament building, past Westminster Abbey, St. Margaret’s church, and Big Ben. This got us to Westminster Pier just in time for our boat trip to Greenwich.

The boat trip was long – quite a bit longer than I expected – but it did let us see a lot of the sights and helped us get the big picture on the layout of London. We were able to take a lot in interesting pictures from the boat, and with minimal effort which was key: we both nodded off at various times on the return trip to Westminster.

Greenwich was very cool. We stopped at The Old Brewery, called “Meantime” on the grounds and I tried some of their local Pale Ale. We also shared a small “lunch” of bangers and mash (wonderful!). After that break we took a walk up to the Greenwich park and then climbed up to the Greenwich Observatory. Unfortunately they wanted 10£ to see the Prime Meridian up close, but the views were worth the walk and we got lots of other great shots.

We wandered around a bit more and then hit the return boat around 4:30pm, getting back to Westminster around 6pm. We ate dinner in our hotel restaurant – fish and chips! (that was excellent too, by the way. Everything we’ve had to eat so far has been wonderful) – and then headed to our room for beloved sleeps.

Haven’t processed all the photos and may not put that many on here anyway – they might go straight to Flickr. But here are a few we snagged with our cell phones that should help capture the day…